I stepped tentatively out of bed and felt a twinge of pain in my left hip and lower back. The pain grew as I hobbled to the kitchen. I attempted to brew a pot of coffee. Before I could fill the carafe with water, tears ran down my face my ears rang, and the pain in my back grew extreme, running like hot water down into my leg. I sat down and tried to alleviate the pain but nothing I did made it better. After several attempts I gave up on the coffee (if you know me you now know how bad this hurt) and considered waking my spouse up to take me to the ER. But 45 minutes with a hot pad alleviated the pain enough to get by. A trip to Urgent Care later in the morning provided relief in the form of Motrin, a more powerful pain reliever, and a muscle relaxer.

The events above, all occurred a week and a day before the St. Luke’s half-marathon. I had somehow injured myself while at the gym doing a core workout the Tuesday before. I don’t know what I did but was suddenly considering the possibility of attaining a $65.00 shirt and moving on to the next planned event. I spent several rest days looking around at a lot of expensive running, swimming, and biking equipment that all suddenly seemed like someone else’s belongings. I couldn’t stand for more than about 30 seconds without crumpling to a chair or the floor in agony. The idea of running seemed totally foreign. It is funny how the athlete’s psyche plays games at such times.

But rest is a wonderful thing. By Tuesday (one week post-injury) I was suddenly feeling better and a brisk lunchtime walk showed I could move without a great deal of pain. A couple of more conservative days of training and I felt I was good to go for the Sunday half-marathon. The plan was, if there was discomfort in the injured area, STOP! This was not the “A” race for the year.

Fast forward to the weekend. Friday afternoon, Janice & I headed for the Allentown KOA which is one of our favorite regional campgrounds. You turn off Route 100 just North of the busy intersection of I78 & 22 and suddenly you are in a peaceful little valley along a trout-filled creek. When we make this little escape I always think of Rivendell from Tolkein’s “The Fellowship of the Ring”. 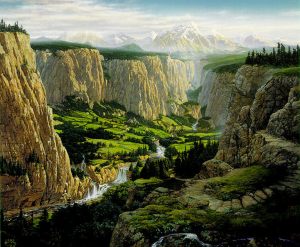 Saturday was packet pick-up in downtown Allentown. I can never drive straight to the hotel. I always wind up making several wrong turns and spiraling my way closer, and closer until stumbling across the correct street. It doesn’t help that my GPS is woefully out-of-date. Finally, we arrived, buzzed through the small expo and then made a stop at the Allentown Farmer’s market for fresh produce, and a dinner purchase at Johnny’s Meats. My race would be powered by filet mignon and sweet potato. Yum!

Race day Sunday dawned calm and cool. It was supposed to get windy later, but there was no sign of that Sunday morning as we headed out a bit too early to the parking lot at the fairgrounds. I had debated on race attire but with the temperatures in the mid-40s elected to go with a singlet and shorts. This was a perfect choice.

Janice and I met my friend and multiple Ironman finisher Jen Bush at the high school gym where the race is staged. I had picked up her packet for her so gave her her stuff and we spent a while talking and fueling up before the race start. Jen had to use bag check and I wanted to get a coach-advised warm up in and make sure my back felt good. A 10 minute warm-up showed all was well, and I was able to finish up within 5 minutes of the race start. I made my way down the corrals to the first corral where the green bibs were. I was hoping for something in the 1:35-1:40 range. I had done this race before and while I wasn’t shooting for a PR I did want to push the pace and work on my mental toughness for those last few miles at Ironman Lake Placid later this year. I was pleasantly surprised to find coach Craig in the first corral along with our Endurance Multisport club admin Kelly Roth. Craig was planning to pace Kelly to a new PR.

Moments later, the countdown to the start began . . 3 . . 2. . . 1 BANG! We were off. Unless you are toeing the start line the beginning of a race is always so anti-climatic. You shuffle slowly forward until getting to the start. “Well, this is easy so far”, I thought chuckling to myself.

St. Luke’s (formerly Lehigh Valley Half, formerly Runner’s World Half) is a mid-sized race with something like 3600 participants. The start moves quick and it didn’t take long to get up to speed. My plan/hope was to keep to something like a 7:20 or better pace. Again, I was not trying to PR but I wanted the race to be mentally difficult.

Miles 1-5 went swimmingly and without difficulty. One fun thing about this race is all the music they have along the course: something like 12 bands. In the first mile there were drummers using big Japanese drums. I decided it would be awesome if they loaded them in a truck and rode alongside while I ran. I could definitely pace to that.

There is a lot of downhill at the start. Miles 6-10 take place mostly in the park in the middle of Allentown. I don’t know the name. (I’m sure Google does). But it is a pretty park featuring a big trout stream, a covered bridge, and short, leg-hurting climbs. These are not long. Maybe only 30 yards but . . ouch. They sure do knock the momentum out of you. It is a trail and, apparently also open to horses. Watch your step! Life in a half begins getting mentally tough around the 8 mile mark.

I see now where some time slipped away. I thought miles 8-10 were a bit faster than that. GPS based watches have notoriously bouncy paces. I do know that as I crossed the mile 10.1 mark I did quick math in my head and the “let up a little voice” said if you maintain just better than 8:00/mile pace you will still be close to a PR. “Shut up voice”. I grabbed a gel and bore down. The pace was getting difficult. It is clear that a faster half would definitely require a bit more run-specific conditioning. But I wasn’t here for a PR. I just started focusing on the next mile.

Somewhere in the last mile there was a group of young men cheering wildly for every runner. Our names were on our bibs and one of them would read it and they would all go nuts and call out your name. This was REALLY, REALLY awesome! It is amazing the boost you get when total strangers cheer you forward.

Mentally I was hanging in there pushing myself forward but physically my form was gone. This was not apparent to me until I watched the video Janice took. Slumping shoulders, low hands, bent posture. All not good and the pace shows it.

Perhaps the most awesome part of St. Luke’s is the stadium finish. You come in to the stadium in turn 2 run around the track and across the finish on the front stretch in front of bleachers full of people and blaring music. Perhaps the most un-fun part of St. Luke’s is the killer little ramp you have to go up to get in to the stadium. It is a momentum killer on tired legs. I climbed the ramp with encouragement from volunteers and spectators and on to the track. I did not have a big kick left and a couple fellow racers passed by me in the last couple hundred yards. Fine with me. I only really race against myself. As I rounded the last turn I checked the clock at the finish. It was a 1:37:19 and counting. My PR at the half distance was at the Philadelphia race in the fall and it was 1:37:51. I urged my tired legs on . . . . come on . . move! I cleared the finish at 1:37. . 30 something on the clock knowing my chip time would knock a few seconds off. Surprisingly, a new PR.

As always, I forgot to stop my Garmin. But with the wonders of modern technology race results are posted quickly. After a brief recuperation that involved sitting on the nearby grass embankment, I climbed up the stadium to get a black bean brownie and find the results.
13.1 – 1:37:21

I was very pleased with this. From purely a running perspective, there is room for improvement. From a current goals perspective I was happy.

I found out Kelly was able to get a PR as well. In addition to Craig, Kelly, and Jen I wound up seeing a lot of other friends in the race including team mates Todd Turbett, Garrett Persing (who passed my at mile 8 like he was out for a leisurely spring jog), Dave Dammer, and a shout out from Stephanie Burke whom I heard call my name but couldn’t figure out who it was until she told me later.