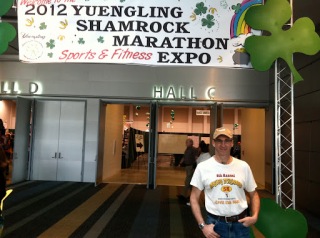 This race report begins one year ago when I crossed the line at the 2011 Shamrock marathon in a personal record (PR) time of 3:32 and change. 2 minutes off a Boston Qualification. No matter. I knew 3:30 really wouldn’t get me in. I was exhausted at the finish. Or was I? Could I REALLY have not made that 3:30 or did I mentally give up? As time wore on I wasn’t sure.
In a move that surprised nobody, the Boston Athletic Association has since, somewhat arbitrarily, chopped 5 minutes off all qualifying times for all age groups and genders. I was no longer 2 minutes from making a coveted BQ but 7. Hmmm. I can’t do that. Or can I? Over the following weeks I looked at my other, shorter race times and those of my peers. I looked at my training. The numbers indicated maybe I have a better marathon in me. Maybe . .
Let me step back a moment and point out that I am NOT built like a runner. At 5’11” and around 180ish pounds I am stocky when compared to other runners. Books by those that are supposed to know say I should be 30 lbs lighter. Those that know me say I would like like an anorexic skeleton. That said, there are definitely still a few pounds that could go away but certainly not 30.
Still I decided I had to try. The first thought was to hire a coach and go nuts. Running, running, running and more running. Heck, even if I got fired it would be worth it if I got that BQ right? Hmm. Perhaps not. I decided I would rather try by myself. The expense of a coach is certainly a point of argument but I still wanted to know it was all me. So I laid out a plan and signed up for what appeared to be the most logical choice of races: Shamrock 2012. It was in a good, cooler month, and it is a fast flat course that I was familiar with.
I started training diligently in November following a 6-day a week running schedule. After a summer of swim, bike, run, suddenly my body hated 6 days a week of running. More importantly, my mind hated 6 days a week of running. I took a drastic (and perhaps fatal to my BQ) step of eliminating one day of running but keeping a high-energy workout such as spin or a hard weight session on that day.
Training went on through a mild winter that only involved one 20+ mile run on the treadmill. The weather gods smiled on the remainder of my long run days and I had perfect training conditions for most outings. My runs were fast, and on target. There was an inkling of doubt on 2 long runs when I struggled to keep a hard pace at the end. There was another inkling of doubt when I could not find time during speedwork days at the end of training to squeeze in a proper set of 10×800 Yassos but had to settle for 6 or 7.
The last 20 mile run was a hilly, windy affair with a head cold. I still managed to finish the whole 20 miles with a friend in 2:45. I thought this was a good omen and felt ready.
Finally, race weekend rolled around. Janice and I departed in our rental car for the 6-hour drive to Virginia Beach, VA. The running community takes over the town for this event. On a weekend that features the beach and St. Patrick’s Day you might think it is a nasty, drunken affair but any college drunks are far outnumbered by runners and volunteers. The half-marathon sells out by January and the marathon not far behind though this year was not a sellout. 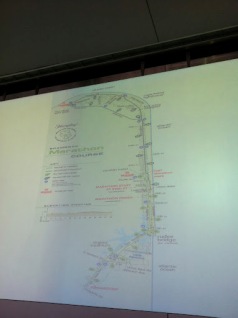 We arrived at the expo mid afternoon and I got my bib, shirt and did some shopping without really buying much more then a gel or two and a pair of socks. Then it was off to the hotel to check in. We go beach front at the Best Western Oceanfront. It is the closest hotel to the exit gate of the finish. I can finish the course, turn right, get a shower and then go to the conveniently close beer tent. We ate dinner Saturday night at Tautog’s. An interesting place a woman at the expo told us about. There is no sign, just a sailfish statue. They also do not take reservations for small parties. We got there at opening and waited in line to learn we were the first people not to get a table. But we were the first people at the bar for 2 of the 7 available bar stools. Thank goodness for that. We got a glass of wine and a menu and enjoyed a scrumptious meal.
Back at the hotel I laid out my various clothes and equipment for race day and also went over a water strategy with Janice. I am terrible with a capital “T” at water stops but can drink out of a bottle no problem. Since the full marathon goes South then loops back by the hotel I arranged with Janice to hand me a full bottle on the way by. This strategy worked like a charm. Finally, off to bed.
Race day dawned, a little cloudy with temps in the low 50s. Throughout the day, it would clear up to a sunny 60 something. It was reported to be only 54 but take it from someone who spent the afternoon in a t-shirt it was not 54 but much warmer. Anyway, where was I? Oh right, marathoning.
I enjoyed some breakfast and coffee at the hotel and made my way to the start with Janice at about 7:55. Race time was 8:30 and we were just a few blocks from the start. The preliminaries involved singing happy birthday to the race (it’s 40th), the National Anthem and an early start for the members of Team Hoyt, and the wheel chair runners. Finally, the 8:30 start for Corral 1 was sounded and we were off heading South on Atlantic Avenue. 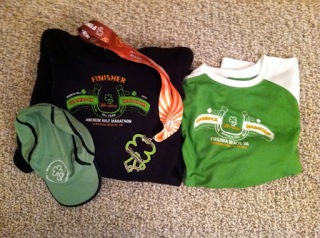