As I roll along Southbound from Boston on Amtrak train 171, I had a few final thoughts about the City of Boston in general and the Boston marathon in particular. Regarding Boston, as a born and bred country boy there are few cities that make me wish I was a resident. Boston is one of them. With friendly people, great open spaces, lots of water, and a rich sports heritage I could easily live there. It is easy to get around and easy to travel from and to. There isn’t much not to like. Also, I really wasn’t kidding about not going 2 blocks without seeing a Dunkin Donuts if that is your thing.

Regarding the marathon, I spent the last day or so sharing ideas and thoughts about my race and training with my fellow runners and marathoners. I definitely feel I was underprepared but also didn’t really take the weather into account enough. It was warmer than I realized at the start but I didn’t know that until I saw the post race information. Apparently it was over 70 at the start. Kinda warm for 10:00am especially when you’ve been training all winter in 20-40 degrees.

Before I qualified for Boston I tried to convince myself that it was just another marathon. Now that I have been here I realized it is truly a celebration of running, sport, sportsmanship, endurance, and the human spirit. 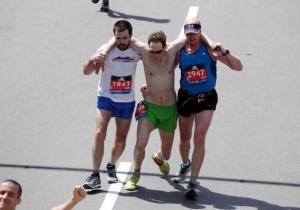 I truly do want to come back again. I foolishly spent a couple hours the last couple days searching around for marathons where I could qualify for 2017. But somewhere along the way I caught the end of a hockey playoff game. The losing team pulled the goalie in the final minutes to put another offensive player on the ice. This is the equivalent of a “Hail Mary” pass play at the end of a football game where the team on the cusp of losing makes a desperation attempt at winning that almost always fails. It occurred to me that the right move is to play for next season and not hurt my body by trying to force in another marathon between now and when Boston 2017 registration opens in September.

As it is, I have a full slate of racing the remainder of the spring and summer including the very difficult American Triple T coming up in exactly one month. That will require some speedy recovery and some hard core work on the bike to be prepared. It is not an easy event. Otherwise I have more triathlons up to and including September.

So instead of forcing something, I’ll begin planning, plotting, and training for a fast fall marathon in hopes of returning to Boston in 2018. If I can make it you can bet I’ll be better prepared for those Boston downhills.

Runners and triathletes tend to get a bit self-absorbed in our training, races outcomes, and schedules I’m sure much to the boredom of those that spend time with us. I had a conversation about this just last week with a fellow blogger. Today while waiting in Boston’s South Station I was reminded again to remember how fortunate I am to have the good health, good wealth, and ability to participate in things like the Boston Marathon. As I was sitting in the train station waiting for my wife to return from the ladies room,  a young lady who was a quadraplegic came rolling up to me. She had a mouth-controlled rolling wheelchair. Noting my Boston Athletic Association marathon jacket, she smiled and said  “Congratulations”! I thanked her and she rolled along on her way with her family. As she left, I couldn’t help but think about my own selfishness in worrying about a slow race time or bemoaning the fact that I didn’t run fast enough to return. Here was a young lady who would, I’m sure, love to just be able to walk to a bathroom on her own power who stopped to give me a kind word. I had been humbled like this once before when talking to a wheelchair bound member of Team Hoyt during the Shamrock marathon. I vowed then to appreciate crossing the finish line even if at a walk and I was reminded of that vow again today.