I’m still here in Boston engaging in the family half of this little adventure. I have been wearing my marathon jacket and am still amazed by the number of people that stop you to say “congratulations” or “I could never do that”. It does make you feel a bit like a rock star. 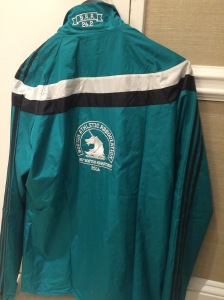 That said, each time someone says “great job” in my head I can’t help but think how things got so far wrong to make me so slow race day. I ran my personal-worst marathon by 4 minutes with effectively a 3:57. Just what you want to do in Boston. Your worst race ever. Since then I’ve been doing a lot of post-race analysis. This might be kinda boring but I have to think this through.

My mantra has been since I qualified as a triathlete, I should train like a triathlete. Despite the demand for specificity, in the past when training solely as a runner and following the time-tested running programs, I have never gotten close to qualifying for Boston. In fact, all I mostly got from high running mileage was injured. With my scoliosis-induced leg length discrepancy I have regularly dealt with severe plantar fasciitis and post-tibial tendinitis. I now have more accessories shoved in my shoes to run without injury than there is original shoe. My best marathon, and my only qualifying time came on the heels of Ironman Lake Placid when I was in the best shape of my life as a result of many, many miles of biking and swimming and far less running than I had ever done when only training as a runner. I still think that for me, swim/bike/run to be faster and fitter has merit. I know several great runners older than me that had great times on Monday who log fantastic amounts of miles even within a couple days of racing. I know I can’t do that or I will wind up sidelined altogether. I think I still need to focus on quality running.

And with that I realize I spent a lot of my training time running flat trails in a group setting. I came to love my group runs over the winter. Group running with my friends made winter time, dark 20 milers bearable. But I think ultimately, I ran too many miles too flat and too slow. I’ve never had my legs get so tired so early in an event and the issue seemed to be sore, rubbery quads when I was trying to maintain speed on long downhills. In retrospect I did not log nearly enough marathon pace miles which was key to hitting my qualifying time at Bucks County.

This part is easy. I am 5 lbs heavier than when I qualified. Things need to change or I can simply give up pretending to be healthy. The sugar must go.

The stress eating must stop. If I need to make life changes to make that happen than it’s really time to make that happen. It is frustrating to do all this work and yet continue to sabotage myself with bad eating habits. I know most runners like to eat whatever they want and can do so because of the high mileage. Sadly, that isn’t me.

I chose a tried a true pair of my favorite Brooks Adrenaline.

They are close to end-of-life. But maybe a bit past in retrospect. This is really a long shot. I don’t think this was really a factor. Granted, I got a gnarly blood blister in an odd place that I’ve never gotten on before, but I think that was more a function of my changed gait from my hip issues than anything. Whether the hip issues were related to worn out shoes is hard to say but that’s a stretch. These are also fairly heavy shoes but again, I’ve run a lot of miles in them in the same shoe for years. It needs to be a balance for me with my oddball leg discrepancy requiring a fair amount of stability and arch support. Still, I may experiment with some shoes but I don’t think that is a major component.

As far as actual race day I got a lot wrong here. I went into the day with the bullheaded notion I was going to try to run a BQ. If it wasn’t going well I was just going to bail out and enjoy the day. As I sat in Hopkinton feeling it get warmer, and warmer I should have bailed early on and just realized a BQ wasn’t going to happen. My qualifying time at age 50 is 3:30. I’ve only ever run under that once. It is not an easy pace for me to run and when I did it at Bucks County on a cold November day I wished my wife was along because I could barely walk let alone drive. I was completely spent. Monday with the heat at the start was certainly not going to be conducive to a BQ. 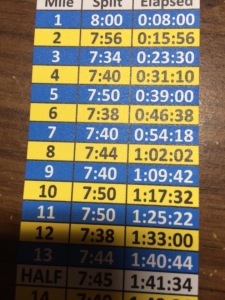 The second strategy that failed was using a custom pace band. When I qualified it was a small race (300 runners) on a flat out-and-back canal tow path. From the start you were nearly running by yourself. No weaving among competitors, consistent pacing, almost a glorified long run. I spent the whole race focusing on my 1/2 mile splits calculating each one as I went using my 3:25 pace band as a guide. It was a very successful strategy that day but that doesn’t work in the crowds and hills of Boston. The only mile I got right was mile 1. After that I fell behind and tried to catch up. Those couple miles of trying to catch up meant running 10-20 seconds faster per mile than I was supposed to be. Worse, I think I was wrong. I don’t think I was behind pace at all but just doing the math wrong in my head.

I think you need to have a much more flexible race plan at Boston and not count on it being your BQ for the next year. If it happens great, but you’d better be prepared to be flexible.

Too Long Between Marathons

I hadn’t run a full marathon since I qualified in November 2014. That was nearly 18 months ago. Was that a mistake? I don’t know. It’s not like I haven’t run although perhaps there should have been more distance events in there. Perhaps not enough muscle memory leading up to Boston? I’m not sure about this.

Maybe I’m just not a Marathoner

As hard as it is to admit, perhaps the full distance just isn’t my thing. I can run pretty fast and competitively for my age group. In the last few months I’ve ran a couple sub-20 5Ks, a 1:12 10 miler, and a 1:37 half marathon. Okay, maybe those numbers won’t get me on the podium but I can run them fairly consistently and they predict a 3:23ish marathon but other than once, I can’t seem to bring that to fruition. Is it because I’m a bigger guy? Too heavy? Just not built for that longer endurance?

I would like to get back to Boston again. It was the greatest running celebration I’ve ever been a part of. I’d like to come back and make a better showing of things and feel like I really deserve the “congratulations” and am worthy of the medal and jacket. I’ll be penciling out some new personal goals in a more private setting but as I think through this I have a short list of must dos: 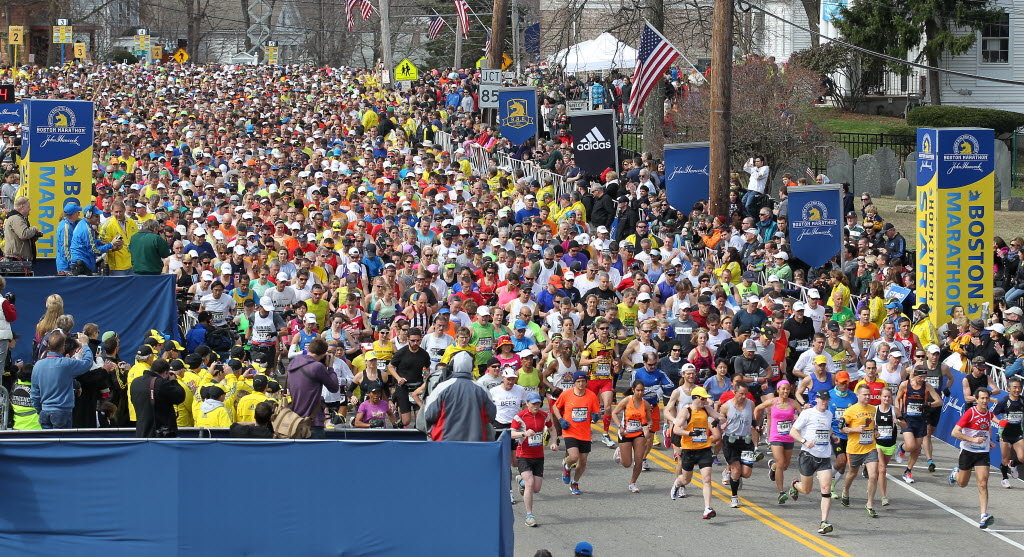 While I can see why runners return to this event year after year, this probably isn’t happening. The registration window will open and close in September and I don’t see a race on the calendar that I could squeeze in to try to achieve a qualifying time. Even if I did I don’t know that I’d be ready. I think my best bet is to target a cool fall race and hope to be back for 2018.