Unless you are living under a rock you know the latest phone app sweeping the country is Pokemon Go. The app is credited with getting people outside and moving. Being a trendy kind of guy I wouldn’t want to miss out on the somewhat geeky opportunity to walk around in public staring at my phone hoping to catch an electronic phantom that, combined with a $1.69, gets me a fresh 20 oz. cup of coffee from Wawa.

I’d heard rumors that the course for the Piranha Sports  Diamond in the Rough triathlon would be chock-full of Pokemon. Knowing this, I packed up my bike, running shoes, and swim goggles along with my phone and headed for Perryville, Maryland.

I have now officially used up all I know about Pokemon Go. In fact, I probably have a lot of that wrong. Other than spying a few people wandering around like Mr. Spock staring at his tricorder, I don’t know anything about Pokemon Go. Of course, some would argue I really don’t know anything about swimming, biking, and running either but that hasn’t stopped me from doing triathlon.

I do know that Diamond in the Rough is probably on my short list of favorite triathlon courses. We stay at a pretty little State Park a few miles from the start. We can take the motorhome and easily park at the race venue of Perryville Community Park. It is a rare Saturday event leaving the remainder of Saturday and all day Sunday to unwind and relax. And the course is quite fun! Unless you are a) a flatlands biker or b) really looking for Pokemon.

This was my first triathlon of 2016. This is very late in the season for me to finally do a triathlon. I was supposed to do American Triple T in Ohio in May but wound up enjoying myself way too much in Boston and focused on running for most of the spring to get back there next year. I realized I didn’t have the needed bike fitness for the difficult Triple T course and I had run a hard marathon to re-qualify the week before Triple T so I ate my entry fee. At least I saved the travel and expenses rather than drive to Ohio to torture myself for 3 days. This is, after all, something I do for fun.

Where was I? Pokemon.

No. Racing finally. The interesting thing is I hit Diamond in the Rough this year with the intention of just racing it “easy” so to speak. Rather, I wasn’t going to go kill myself. 2015 was very hot, but this year the humidity lay on the course like a hot, heavy, wool blanket. It was even difficult pulling on my tri kit because it was so sticky. Oddly, despite the just-have-fun attitude, my final results for the day were remarkably similar to last year when I felt like I killed it and had a great race.

The swim, this year: 32:16. Last year: 28:24. This year the water was 82 degrees and all but a few wetsuit diehards went without. It was my first non-wetsuit long OWS of the year and while I didn’t have my old mental demons, it did mess with my mind a bit and I stopped every few hundred yards to put my head up and “rest”. I did this really more than I needed to. That said, it was still a slow swim for many due to a fairly heavy current on 2 of the 4 legs of the swim. We did get a nice boost back toward the dock on the last leg. Other than the inshore grasses there was nothing else particularly notable on the swim than the fact that a non-wetsuit swim will always be slower than one with the flotation boost provided by the wetsuit. All in all I was fine with a 32 minute swim which includes climbing up the two flights of steps. 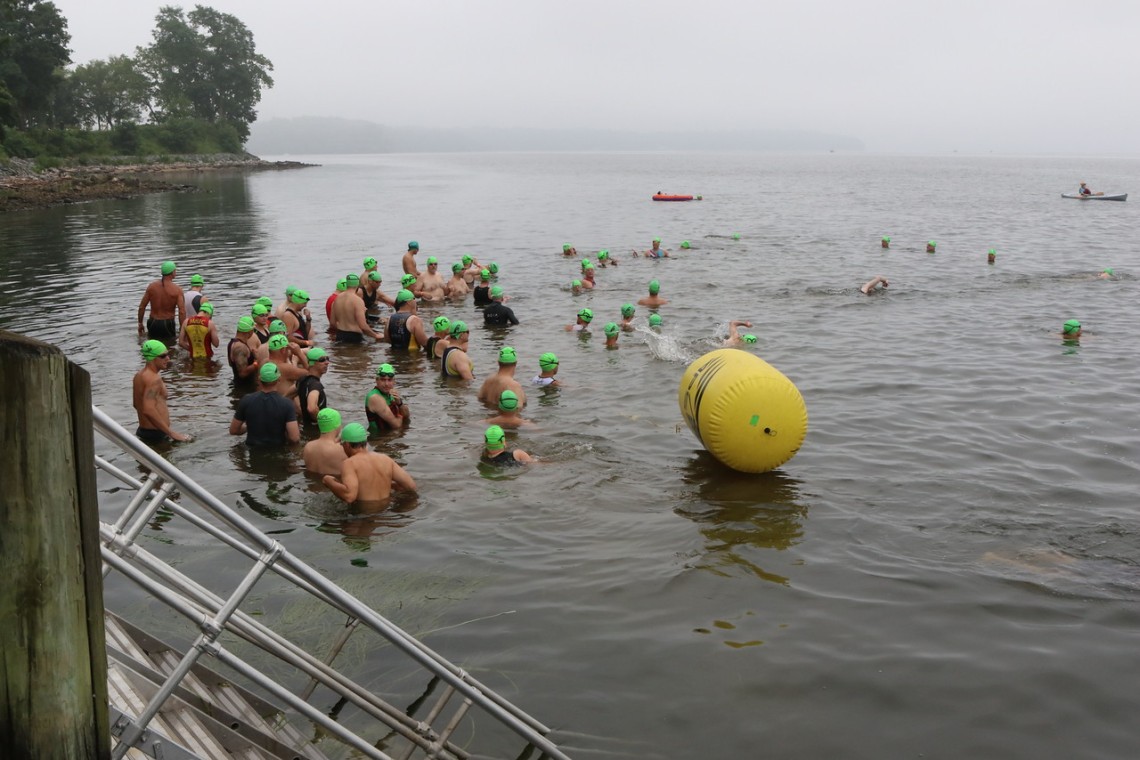 I thought T1 would be way slower than last year. It seemed like I dawdled around quite a bit this year even sitting down to pull on my new bike shoes. But at 2:12 I was actually 8 seconds faster than last year. Bear in mind I take a few seconds to spray down with sunscreen. After being burned to a crisp at Eagleman a few years ago I will never skip this step. I also retrieved a pair of loaned goggles that had been left on my neighbors transition mat instead of mine.

Shortly after mounting my bike and heading out the shaded driveway of the park, I realized I had forgotten to properly configure my Garmin 310XT. I use it for running all the time but typically ride with a different bike computer. I had it configured for multisport mode but had forgotten to display power, and other statistics I wanted so that I didn’t overcook the bike. I sacrificed 5 minutes or more on the side of the road trying to get it right but was ultimately unsuccessful. I decided to pedal on without worrying about numbers.

This would be my last race on my trusty Felt B10 named Black Betty.

She isn’t really all black but mostly black and it fits with one of my favorite songs from spin classes. I had thought I made a smart buying decision when I bought the B10. I thought I had been properly fitted by a reputable bike fitter. It turns out I was “fit” to a bike that happened to be in inventory. As I left T1, I realized my next race would be with my new, better fitting, Specialized Shiv. But today I was riding Betty with a slightly better, if not perfect fit than prior races. My seat was higher, and the reach a bit shorter. This was not exactly as safe or as comfortably as it could be but definitely better than the prior settings. At least I was able to generate power much more easily.

The Diamond in the Rough bike course is hilly and fun. It’s got some great climbs, some fun descents, and enough flattish areas to let the time trialers have fun. There is one really hard turn where they have flaggers on the course to slow the riders down. I braked hard as I approached and found a bit of a backup around the bend. There was a pick-up truck with trailer trying to get through the stop sign. As it cleared out, we began to go up the hill past the stop sign, a “gentlemen” with a disk wheel came charging up from behind,  in his aerobars screaming “ON YOUR LEFT. BLOCKING. ON YOU LEFT”. I had passed this guy some time ago fairly easily on a small hill. Now he was coming off a hill being a jackass and charging through riders who were log jammed due to course conditions and, frankly, being an asshole about it.

The next few miles of the course after the hard turn were fairly flat but then once through Perryville, we have to climb “the hill”. This hill is a mile and a half climb away from the shores of the Susquehanna river. It is a back-breaker for a lot of riders. I’ve spent the spring and summer riding around the hills of Berks County and really had no trouble spinning my way relatively quickly up the hill, passing one rider after another. One of the very first riders I came across less than a third of the way up the hills was Disk Wheel Man and he was struggling mightily to even move his bike forward up the hill. I’m normally not vindictive but couldn’t keep myself from silently pedaling up to his back wheel before calling out firmly “ON YOUR LEFT”. I then passed him easily and never saw him again.

The hill is the last challenge of the bike course and, after a speedy descent, found myself making my way back toward transition. I had been watching the clouds hoping the sun would stay tucked behind them until I was done my run. More than once it threatened to clear and turn the already-humid day into a veritable pressure cooker. I got off the bike in 1:33:53. Slower than last year’s 1:30:14 but not when considering the unsuccessful Garmin configuration stop. More importantly, even with just the seat changes and slight bar change there was no back pain to prevent me from running. This bodes well for riding the new Shiv.

T2 was virtually the same as last year and I was quickly off on the run. As mentioned, no back pain to slow me down . . . but the humidity was doing it’s best. Last year I had run a really aggressive race in the heat to the point that it was very necessary to sit down quickly at the finish line or fall down. I decided this year to target an 8:00 or so pace. I know I can run faster than that but since not planning to be super fast today, I decided that would be sufficient. I started out really well holding exactly an 8:00 pace for the first 1/2 mile or so but managed to keep picking up speed and subsequently my heart rate. The run course goes through a military base of some kind adjacent to the park, and then out in to Perryville for a bit before turning and coming back. As I left the base I saw a younger man walking and nursing some major road rash down his whole left side. It was a sweaty kind of day and it must have burned like crazy. I cringed. Must have been a serious fall on the bike. I’d hate to be him in the shower later.

The run is kind of my thing but I never really found a good rhythm and crossed the line at a slightly disappointing 41:04. This is a full 4 minutes slower than last year. When I look back at the day the run is the only thing I think should have been better than this. The lesson learned here is to get in some brick workouts. I’d done none leading up to Diamond in the Rough. The sun made its inevitable appearance for the last mile. I felt bad for those slower than me that would have to do the majority of the run in the steam and sun. But hey, that’s triathlon.

Results aside, Neil Semmel is one of the great local race directors. He runs a great series of events and is doing his best to continue to attract athletes and keep costs down. If you want to do a fun, inexpensive race, with FREE photos, check out Piranha Sports. I know I’ll be back at Diamond in the Rough next year and I’ll be ready to race it hard too.