America is falling into anarchy. The top 1% are the only ones with good jobs, who are able to buy groceries, and who aren’t going to die from flesh eating bacteria. Donald Trump and the Republicans have taken away everyone’s healthcare and left us scrounging in the streets for used band aids. The White House has installed secret coal-burning “atmosphere heaters” to warm the atmosphere to a hot enough level to give everyone orange skin.

America is falling into anarchy. Illegal immigrants are flooding over the borders, eating babies, and turning all the toilet paper the “wrong” way in public restrooms. Iran has America in its crosshairs and finger on “the button”. There is a Muslim with a dirty bomb behind every other tree and Barack Obama signed an Executive order calling for the government to spread flesh eating bacteria to encourage the support of the Affordable Care Act.

If you spend too much time on social media, watching the so-called “news”, or otherwise wringing your hands about politics one of the above scenarios probably plays out for you in your head every day. Like most things, the truth and reality probably lie somewhere in between. As someone who long ago stopped voting for any candidate with a “D” or an “R” behind their name, I spent the birthday of the United States simply looking around at life and making my own determination how good or bad things are. What I found, at least in my corner of the world, is a diverse and thriving America.

The extended holiday weekend found us camping deep in the heart of Amish country in Pennsylvania. Years ago, Amish country was white person central. Only white people would be found on buggy rides, at local Amish and Mennonite craft centers, or at roadside stands buying just-picked cantaloupe and corn. This weekend at Red Run Campground we have seven Indian families camped next to us, and just up the dirt path, there is a large Puerto Rican contingent I recognize from last year featuring at least four or five families. These two groups provide bookends around another large group flying a “Don’t Tread on Me” and “Second Amendment” flags. Elsewhere in the campground there are African American families, and Chinese families. All have one thing in common: Whether the camping apparatus of choice is a tent, 5th wheel, or motor home, everyone is proudly displaying their American flag.

Now, don’t misunderstand. I’m not a devout patriot by any stretch of the imagination. I take my America with a grain of salt but after the daily dose of the 2019 version of news and politics it is pretty awesome to see so many diverse cultures united by the Stars and Stripes and the opportunities it provides. 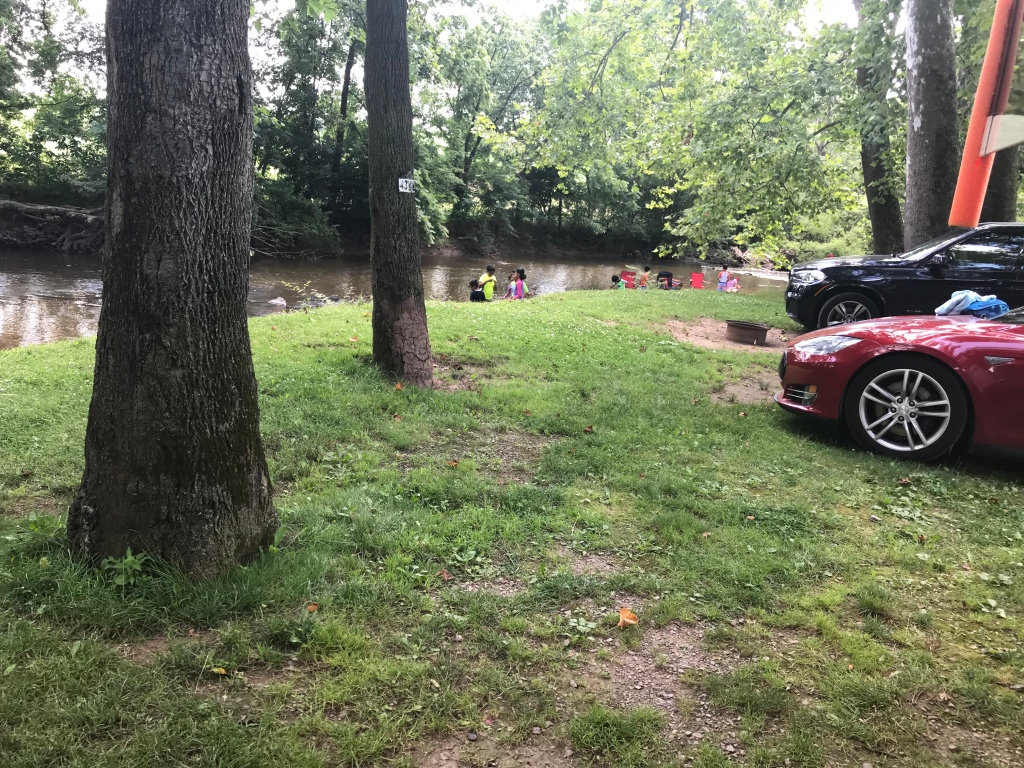 The group of children from around the campground have spent most of the hot afternoons int he creek together.

One of my favorite parts of the weekend was watching the informal cricket tournament started by the Indian kids across the road from us. They had a sizable group and play was loud and raucous with lengthy discussions about various plays. Mostly there was laughter and fun. I watched as the two young white boys from the next site over watched the play, edging ever closer and finally getting the opportunity to pick up a foul ball and offer it back into play. Moments later, both boys were immersed in the game and learning how to swing a cricket paddle. The next time I looked one of the Puerto Rican children was in the game. One is quickly reminded how prejudice is a learned behavior.

The evening of the fourth found us in New Holland, Pennsylvania waiting for a fireworks display. As we sat in the small community park, the fireflies emerged from the grass providing a prelude to the man-made display. As more bugs emerged, the kids began chasing after them trying to catch them and get them to light up their hands. It did my heart good to watch this childhood merriment. It seemed like only yesterday that I did the same. The lightning bug hunters too were of all skin colors. They laughed and played together not caring about each other’s backgrounds. Meanwhile, a Philippine family organized a group picture of themselves holding a big American flag.

Is America perfect? Nope. Not by any stretch of the imagination. There is plenty of poverty right here at home. Our education and healthcare systems need help, and there is only so much money to go around. But things aren’t quite as dire as either political extreme would have us think. The world probably isn’t ending in 20 years nor is climate change pseudo science to be ignored. Whether we like it or not, people of all backgrounds and all walks of life are living together mostly harmoniously. So stamp your feet and hold your breath about the actions of our ridiculous and childish political leaders if you must. Just don’t forget to gently catch a firefly now and then and look around and realize it really isn’t that bad out there on the whole.