I wonder how many Yogi Bear Yoga jokes there really are? Hundreds? Thousands? None? A quick Google shows at least one story for Yoga and Bear. Note to self: Skip the early morning Yoga by the lake with ear buds in.

Oh . . and yes. I finally have tried yoga. Despite world-class athletes like Craig Alexander

emphasizing the importance of yoga for older athletes, and despite and on-going New Year’s resolution to try yoga, I kept putting this off. You see, there are approximately 1,923,871 different forms of yoga. I may be exaggerating the number slightly but when looking for a Beginner’s Guide to yoga, it lists 9 different types. Um, excuse me. I said “Beginner”. I’m probably not ready yet for hot yoga, or naked yoga. (That’s a real thing, BTW.) So each time the yoga classes have been announced at the gym I look down the list and see things like Ashtanga Yoga (ash what?), Kundalini Yoga (Kundalini . . . isn’t that like rotelli, or manicotti?), or some other non-basic sounding yoga it gets a little intimidating. Yes sure, I’ve done an Ironman and other scary things but swim, bike, and run are all simple things I did as a kid. The trouble has been I didn’t know my downward facing dog from a hot dog. 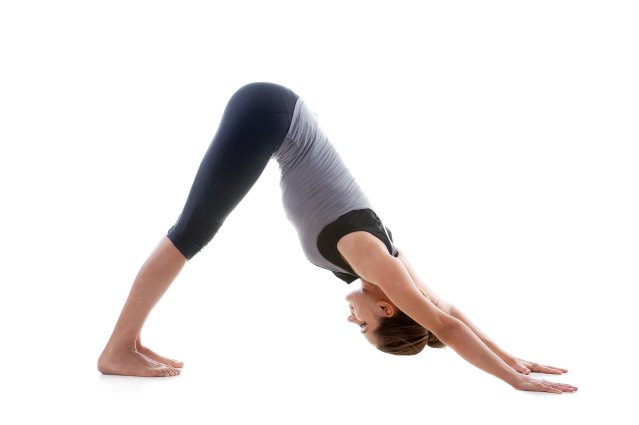 Then last fall during a lunch time run at work, Jung Kim mentioned she was getting her teaching certificate for yoga. I assume there is some fancy, yoga-like term for this. Maybe Cittaficate, or Guru Papers? Okay, enough with the yoga jokes. I asked if maybe once said guru papers were attained, perhaps she could do a basic yoga class at work. Jung was enthusiastic and an informal survey (of the 5 people we were running with) showed favorable results.

Now in most places putting together a basic, informal yoga class would be a simple thing. Get a few people, get a few mats, get flexible. But we were in  no ordinary place. We were in the CORPORATE world. You would think having been around the corporate block a few times in the last 28 years I’d have been smart enough to not be so specific when we asked for a room at work. I should have said we wanted it for something much less suspicious like forming an ISIS cell or maybe performing satanic rituals

but instead I was dumb enough to actually say we wanted to do yoga. What ensued was months of corporate red tape and planning. After the first dozen or so e-mails and phone calls I was ready to give up my resolution for yet another year but fortunately Jung was persistent and played along. After weeks of filling out forms, signing agreements, and producing videos that prove she is a) a real human being b) capable of becoming and safely teaching others how to become a human pretzel we finally had some yoga classes scheduled. I have to give Jung great kudos for her perseverance. It is a shame she won’t get to keep that first child when the time comes though.

In the end, we had 3 yoga classes in June at the end of the work day. Jung was worried we wouldn’t have more then 5 or 6 people. But on day one, I arrived at our auditorium at work at the last minute and almost didn’t have a place to setup. I think 30 some folks had shown up to participate. I think Jung was excited and happy. If she was at all nervous it certainly didn’t show.

I also rescanned the announcement to make sure the word “naked” wasn’t anywhere on the page. I reached out to Jung and she explained that yoga straps and blocks are aids that simply make some of the poses easier for some people. Ahhh. That makes sense. Given my complete lack of flexibility, I’m probably the “some people” blocks and straps would be perfect for but I didn’t even own a yoga mat the morning of the first class so I figured I’d keep it simple for now. At lunch, I ran to Target and bought a yoga mat.

Pro-tip #1: Yes. I’ve been to 3 classes and now I’m giving you an important pro-tip. Don’t buy your yoga mat and use it the first time without unrolling it, washing it, and letting it diffuse a bit. Alternatively, have a designated driver.

The first day I scurried in to class, scanned the packed room and found a spot up toward the front where I could easily watch Jung and understand what to do. I enthusiastically unrolled my new mat and followed along as Jung gave instruction. We started out in a series of downward facing dog, full plank, half plank, upward facing dog. In all these poses you face the mat or have your face fairly close to the mat. All I could think is “What is that smell”? The mat had a strong odor of whiteboard cleaner or a very overpowering new car smell.

Yoga has a lot of breathing. I mean, that’s good. Breathing is generally pretty healthy . . . unless you bought your yoga mat at lunch and left it rolled up in the car all day. During a half-plank, Jung had us hold the pose and breath deeply through our nose. “Oh good god . . I think I’m going to pass out from that odor”.

Fortunately we moved into some other non-mat facing poses and my head began to clear though the smell was still overwhelming.

One thing that became quite clear very fast is that yoga is a bit of a workout. I had forgotten my towel and was sweating profusely. I always pictured yoga as this slow, artful transition from one arm-waving pose to another while mentally trying to find the center of the universe. Well, after a few transitions through the various dog and plank poses and then the dreaded chair pose that idea was out the window. Yoga is hard work!

Jung was doing great. She kept yoga personable and fun always giving those of us that were new and less flexible an out if needed yet providing challenges for the more advanced students. I was having a difficult time believing she hadn’t been teaching for years. We progressed through the chair and warrior poses eventually getting to my real nemesis: the balance poses. I struggle with balance and my lopsided body and weak right leg don’t help. But we got two tries at everything and I was surprised how well I was able to execute the poses on the second try. 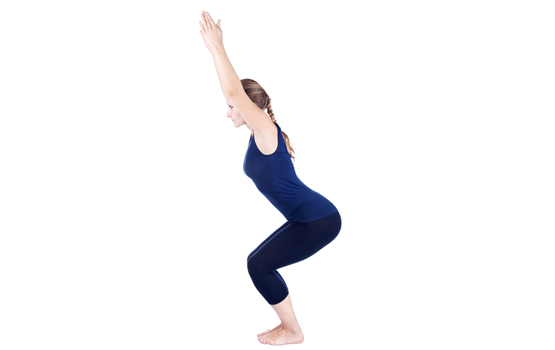 Finally we began winding down to a series of stretching and recovery poses. I tend to have a lot of tightness in my glutes, hamstrings, and IT bands and found a lot of positives in this phase, especially the half-pigeon pose which I’d never thought was something I could do. We finished up in the corpse pose

(I’m an expert at this), and finally a squat pose and my very first “OOMMMMMM”.

Post-class, I felt really good. When talking about yoga one always gets the sense there is supposed to be some transcendental event that removes one’s inner spirit from the body and into the clouds (or fluorescent lighting in our case). I can’t say that happened, but it certainly was a great way to unwind and relax at the end of a busy day. My body felt loose, limber, and strong all at the same time. In short, I liked it!

There were two more classes in our pilot program. I cleared my schedule to attend both and had similar experiences there minus the stinky mat. Some dish detergent and a few hours in the sun solved that.

Pro-tip #2: Don’t be surprised if you do have that transcendental moment somewhere along the way.

In our last class, during our class-ending corpse pose (did I mention I’m an expert?), Jung had figured out the sound system and played some relaxing music while we laid there with our eyes closed. She had serenaded us with her beautiful voice in class #2 but the music was nice as well. As I lay there I was suddenly taken back to an afternoon as a teenager when I was laying on the living room floor. It was the end of a busy, tiring, fun weekend. I had been watching TV essentially laying on the floor in a corpse pose with my dog next to me.

She lay content with her muzzle resting on my arm as I rubbed her belly and we both dozed off. As I lay in our makeshift yoga studio, I could smell the delicious smell of Mom’s dinner and feel my dog’s relaxed breath against my skin.

A tear ran down my cheek. There. I said it. I had my transcendental yoga moment. The tear startled me out of the past just like when Mom had crept in to the room those many years ago to turn the TV off with a startlingly loud CLICK that woke me up and sent Holli scrambling behind a chair. What is with women and televisions anyway? Are all women born with a “turn off the TV” gene? And why can’t men shed a tear in public without being embarrassed? But like Mom and the irresistible urge to turn off the TV, I quickly and subtly wiped away the tear and blinked my eyes dry before engaging in our final group “Namaste”.

I don’t know if we will have any more yoga classes at work. It was very popular but Jung will have to decide if it is worth the bureaucracy. I do know that I will otherwise try to add one session of yoga a week or at least every two weeks, potentially at the gym. Minimally, I will make time to do a bit of a yoga routine at home. I’m still not ready for advanced yoga but will promise to stop making bad yoga jokes or references. Well . . . almost.