Oh, hi everyone. Long time no chat. As always blogging falls a bit off the radar for me in the fall. You see, while all my running friends train all summer to race fall races, the main reason I started running (and all this other nonsense) is to stay in shape for other things I like to do in the fall. I can be found most weekends from October through December with a gun or bow in my hands chasing deer, ducks, and other tasty wild game.

While the popular media may portray all hunters as Elmer Fudd, truth is successful hunting is typically a difficult, vigorous endeavor. If you are fat and lazy you are known as a “vegetarian” in hunting circles because you never really have any success. (Relax my vegetarian/vegan readers . . .it was a joke.) In fact, one of the catalysts for me to begin running a few years ago was an especially difficult 90 yard drag of a not-all-that-big deer I had killed. I thought I was going to have a coronary from my heart pounding against my rib cage.

But I’m sitting here on a cold rainy Christmas Eve morning thinking about 2016 which I’m referring to as the year of the DNS. (Did Not Start). While overall, I’ve had more podium finishes than I’ve had most other years, I seemed to have missed nearly every key race of the season.

The year started out well enough with a fairly good Icicle 10 Mile. This was better than last year when I was “out” with plantar fasciitis. And while the Boston weekend was absolutely awesome and far better than I expected, my race result was a bit of a disappointment. But at least I made the starting line, and really did enjoy the day. Things were looking up a bit when a month later I nailed a BQ at the Run for the Red.  I then held on to that fitness for my first podium in June at a new race experience.

Somewhere in there was also my first DNS of the year. I had talked many times about American Triple T and it was supposed to be my big spring race. I was supposed to hammer out the bike miles post-Boston. But I was supposed to have BQed at Boston. And the weather was supposed to warm up after Boston. None of these happened, but I did hear an interview with the sadistic sounding race director of Triple T whose voiced laughed a bit when he talked about watching the elite athletes cramp up in the 3rd of 4 races. Sounds like a good time. I knew I would not be ready for the brutal bike course offered by Triple T.

I made the decision to forfeit my race entry and focus on getting back to Boston. In hindsight it was the right decision but in the back of my mind I know I chickened out.

As the summer progressed, races became either outstanding successes like Steelman, Marshman, or the other races I didn’t have time to write about, or complete, non-events such as Rev3 Pocono where I had to defer due to a rather annoying and mysterious UTI. But then real disaster struck . . repeatedly. I have dealt with on-going nagging injuries in my right foot and ankle due to my scoliosis-induced leg length discrepancy. 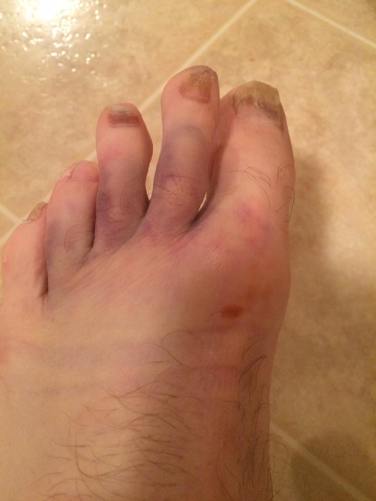 This didn’t wash off 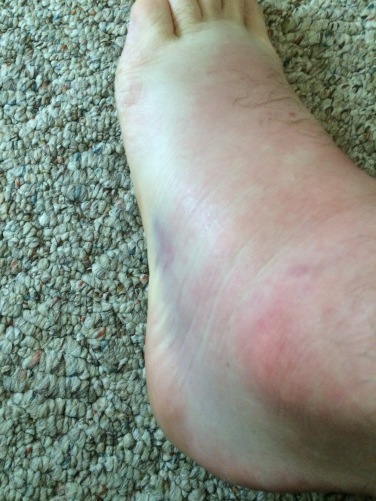 But this year something new happened. On a hot July morning, I severely rolled my left ankle on an unseen bit of loose asphalt. I carefully treated the injury using the usual prescription for a high ankle sprain.

The upshot was repeatedly rolling my now-weak ankle 3 more times from July to September culminating in a major DNS for the Steamtown Marathon. A race I was banking on to get me to Boston in 2018. It also landed me with a strict “no running” order from the orthopedic doctor for nearly 9 weeks. This is where being a triathlete paid big dividends. Being able to bike and swim at least allowed me to maintain sanity if not my waistline. I did some pool running although I couldn’t handle those mind-numbing sessions for more than about 45 minutes. This becomes increasingly difficult as the geriatric crowd waltzes about the deep end of the pool on floats discussing their various bodily functions that no longer work properly. I learned it is impossible to un-hear those things the next time you have to swim in that same pool.

From a non-athletic perspective, 2016 can kiss my rear end too. I already discussed falling out of a tree.

I also went to the dermatologist in November where they carved off various barnacles, and other unsightly tidbits of skin all of which were sent off to the lab for examination. A week later my phone rang with results. It sounded good at first. “The spot on your temple was negative, as was the spot on your back”. But clearly when she was being that specific there was another shoe waiting to drop. And drop it did. THUD. The other two spots were positive for squamous cell carcinoma. A fairly mild form of skin cancer. Two sessions of MOHS surgery were prescribed both of which turned out to be fairly minor and pain free if not a hassle. But . . 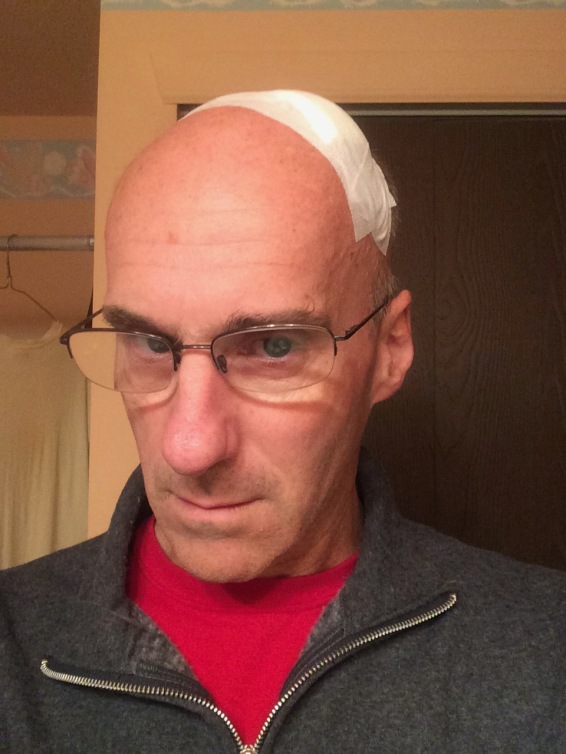 There is always a but. For many years I have driven either a hand-me-down Ford Fusion from Dad’s estate, or a fairly basic, manual transmission Scion xB, or a fairly basic Pontiac Vibe. All things we could either tow behind the motorhome or get for free. I decided with a few years to go in the corporate world, to put practicality aside and buy a nice car I’d really enjoy spending my long commute in. I splurged on a brand new 2017 Mercedes GLC. It was hand-crafted for me right down to the paint job, special order from Germany. I commuted to work for 7 days with a smile on my face deciding it was worth every penny.

On day 8, I left the dermatologist office after having my face sewn up like the seam of a football, traveling to work on a slightly different route than normal. It was after 8 in the morning in a fairly heavy trafficked suburban area. DEER! WHAM! Of f_____g course!

So . . here I am. It is Christmas Eve. My wife’s Christmas present appears to be slightly less neatly wrapped then this year’s venison steak. I have taken on a wealth of self-gifted triathlete’s presents including new race wheels, and a new pair of Hokas. Perhaps a new bathroom scale should be on the list too. The current one has taken to creaking and groaning when I step on it. I think I saw some springs and gears pop out this morning. But since I am still buying things like shoes and wheels I guess that means I plan on staying neck deep in the endurance sports for another year.