“Got him”! The exclamation came from my buddy Joe as his fishing rod bent into a parabola. Clearly a large black drum found his clam bait and had taken umbrage at the hook now firmly attached. I reeled in my untouched bait and cleared the way as Joe and the fish made a bee line for the stern of the boat. This is the way it works on an open boat. The person with the fish has right-of-way and it is up to others to move when a big fish is on. Fisherman know this. The only problem was, it was a Saturday night and the boat was loaded with 17 Russians who hadn’t really fished before. Instead of clearing the way, the entire group surrounded Joe peering over the rail trying to get a glimpse of the fish. None of them had reeled their lines in. Joe’s fish was the first to be hooked on the boat for the whole boat and they were genuinely excited to see it. One younger kid hopped up on the bench, phone in hand, capturing it all on video. The captain yelled at him to get down. The mate yelled at the other Russians to reel their lines in. But it was too late and the admonishments fell only on Russian speaking ears. Joe’s line was hopelessly tangled with several others. Those fisherman, convinced they also had a fish, pulled hard and I heard the inevitable snap as the 30 lb. monofilament parted. Joe was disappointed but diplomatic. Another gentleman later would suffer the same fate and was far less diplomatic nearly starting an international incident while loudly expressing his opinion of Russian interference. Democratic leaders would have been proud.

Happily, Joe hooked another fish later in the evening and boated it. Several other fish were caught as well including one, rather amazingly, by one of the Russians. it turned out to be the biggest fish of the night. He never rose from his seat to fight the fish and how he managed to land it remains a mystery. The good news is the Russians didn’t understand how the pool works. The pool is basically a $5.00 bet that you will catch the biggest edible fish of the night. Winner take all. The Russians hadn’t played so Joe won. Of course, there were only 8 other people on board so it was fairly modest.

If anyone has any Russian fishing friends that went drum fishing on May 4th, chances are they have a picture of the big drum they caught. ‘Cause every single Russian had his picture taken with that one fish!

I fished drum one other time. But like most of my fishing trips, “It was good a few days ago, and it will probably be good again in another couple days”. Story of my life. I’ve always been very lucky with drum fish but the last couple years seem to have fallen out of favor with them. I’m starting to take it personally.

Otherwise, I had envisioned myself doing much more racing this summer. Wait. Strike that from the record. I actually really hadn’t. Since the 2016/2017 seasons were such a disaster both physically and financially (lots of wasted race entry fees) I have taken more of a tack of always being ready to race but not entering before I have to. I’ve been burned by that new philosophy twice this year missing out on a gravel race and a triathlon but it’s okay. The end game for all this stuff is to have fun and be healthy. I don’t miss the obsessive, life-consuming training yet still do plenty to keep my weight less than it was in high school and keep my waist fairy fit and trim.

I did participate in the French Creek Iron Tour this past weekend. It is not a race but a very well-done local charity ride. Typically I have a tough time paying to go ride my bike but I make an exception for the Iron Tour.

This is especially true since 2014 when I was training for Iron Man Lake Placid and wound up doing a 100 mile ride the same day and the same place as the Iron Tour without having actually signed up for it. I kicked myself all day as I watched groups of happy riders stop for brownies and watermelon at well-stocked aid stations. Granted, that wouldn’t be race day nutrition but it turns out I sucked at that anyway.

One of many beautiful spots along the Iron Tour route

The French Creek Iron Tour starts in Phoenixville, PA and offers rides from 11 miles to 100 miles including (for the first time) a 70 mile, technical gravel ride. I chose the 62 mile road course. I seriously considered the gravel but haven’t spent tremendous amounts of time on technical gravel yet and they specifically warned that the course was for expert riders. Also, my friend Tina is training for IMLP and was doing the 100 mile course. The 62 and 100 mile courses go together for quite a while so I thought I’d ride with her until the courses parted ways. And then Tina had mechanical problems a few miles into the day and I never saw her again. Well, it’s the thought that counts. (I hope.) 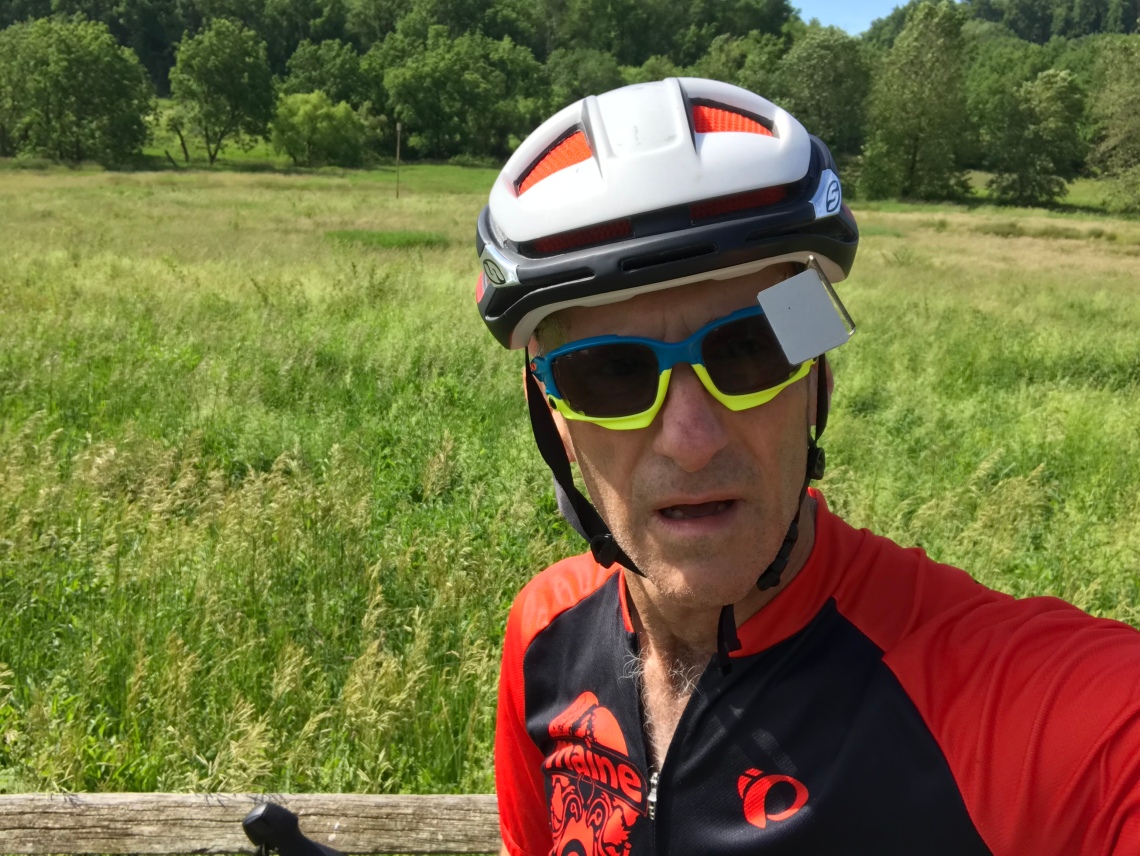 I seem to be confused by the phone here.

Holy smokes this is boring. Are you still awake? Maybe I can get sponsored by some soft of high-test coffee company.

I do have some races coming up. I have violated the “don’t sign up in advance” policy three times:

I have intentions of a few more races for this summer assuming weather and time are friendly and a better deal doesn’t come along. I’d like to get in more gravel riding and maybe another triathlon though those are getting hard to find locally. There are a couple fun races coming up soon I have on my radar. We’ll wait and see what happens.

Otherwise we’ve been doing some camping and learning the new rig. I have been having a ball driving “The Beast”. The Ford F-53 chassis is significantly different to drive then the Mercedes Sprinter chassis of our old, little coach. The F-53 is a true truck chassis with a powerful V10 and 6 speed transmission. It was a little disconcerting the first time that puppy downshifted on a hilly descent and started roaring at me but now that I know how to use it I love the roar and how it controls the speed without me riding the brakes. I also love the stability on the road and not getting pushed around by every bread truck or car carrier that goes by. As I type this we are at our first Forest River F.R.O.G rally. (Forest River Owner’s Group). Despite a prevalence of opinions from the internet-at-large I have found the build of our coach to be very high quality and Forest River to be much more supportive and communicative with owners than Winnebago ever was. So far so good!