Wait what!? No, I didn’t mean me. I’m not doing anything “epic” other than spending epic amounts of money on tests, and doctor visits. But my friends certainly are.

First there is Laurie Dymond.

You’ve heard the expression “Dynamite comes in small packages”? Well that’s Laurie. She spent the last couple years attempting to make the world 24 hour racing championships for Team USA competing against a lot of far younger women. Ultimately, she was named first alternate and was able to compete as an age-grouper at the 24 hour championships in Belfast Ireland. She grabbed 3rd place in a very competitive field. It was a brutal, one-way course. Usually these 24-hour track events switch directions after few hours. Wow. Re-read that and think about that for a moment. Every . . . few . . hours.

Then there is running legend Keith Straw. Many people know Keith. I am fortunate enough to work with him and see him almost on a daily basis. He is one of the most genuine, and humble people I know. Known for running big events in his pink tutu, he is truly legendary in the running community. To put it in perspective, most of us spend the year training for one or two marathons. Keith does them almost weekly as training runs. “Training for what?” you might ask. Well, he recently took a stab at completing his 9th Badwater in a row. For those not familiar with it, Badwater is a 135 mile race across Death Valley. In July. Yeah, who thought that was ever a good idea? Yet 100 or so crazy ultra runners sign up to do it every year. In this case it didn’t pan out for Keith who had to pull the plug at around mile 90ish. It was an exceptionally humid year in the desert and some 20 runners had to call it quits before the finish. This is one of the highest DNF rates ever but members of Keith’s support crew assure me he could not have continued. They were truly scared for him.

It is noteworthy that Keith is 62 years old. (There are no age secrets among runners.) Seeing this kind of effort and knowing that if the weather was just a little friendlier, he would have made it creates a stark contrast to the 60-somethings at the gym. Usually I hear them complaining about their aches and pains and discussing medications all before heading off to the diner for another breakfast buffet.

As I write, Keith is sleeping off the effects of the Burning River 100 in Akron, Ohio that he finished sometime overnight. This no more than two weeks out from running to the limits of his body in the desert.

Theresia Griffin is a mutual friend of mine and Keith’s and served as one of Keith’s crew members at Badwater. She was, no doubt, instrumental in coaxing Keith off the course and to the medical tent. But Theresia is more than just a crew member. She is a bad-ass runner herself. She is in the midst of a rather aggressive quest to complete a marathon in all 50 US states. Each marathon must be under 4 hours to “count”. Her rules, not mine. I’ve lost track of how far away from this goal she is but it seems that a month doesn’t go by that another state is not ticked off the list.

Yesterday, I sat on the edge of my seat watching my friend Susanne Vanzijl crush almost all other members of her age group at Ironman Santa Rosa. Susanne wears her heart on her sleeve, deals with a difficult situation at home, and still manages to go out and rock all her races. With any luck her 2nd in age-group will give her the right to return to Kona this year. This is a race that everyone in the triathlon world aspires to, but few get to experience. I was so over-the-moon for her fantastic outcome yesterday I could barely sleep. 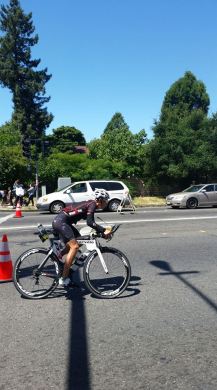 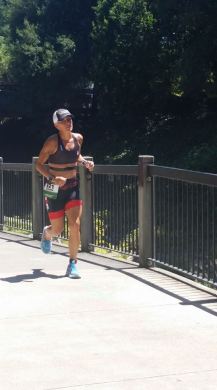 Susanne in her element

These are just a few examples of the amazing people I get to call my friends. There are so many more who continue to offer up amazingly inspiring performances both athletically and in daily life.

As for me, I’m patiently waiting for my next appointment to try to solve the mystery snow shoveling malady. It’s hard to say when or if I’ll get back to doing long distance triathlon or any other long distance racing. For now, I’m continuing to do what I can and I even bought new shoes yesterday so apparently I’m at least planning on more running.

Otherwise, I did some pretty epic wine-drinking as I watched Susanne blast through Ironman Santa Rosa yesterday. Hey, from 3000 miles away it was as much support as I could offer. Well, that and a pretty epic nap.