Never say never! Anything is possible! Damn the torpedos! Pick your expression . . they all seem to apply. The point is I am running again, at least a little for now. I’ve probably posted my last marathon or half-marathon story but you don’t have to run marathons to be a runner.

As I noted in several blog posts, whilst returning from core muscle and hip labrum surgery last year, I was diagnosed with post tibial tendon dysfunction (PTTD) in my right foot. I learned this after incurring a fairly minor foot twinge on an easy lunch time run. The upshot of said injury was the post tib tendon dysfunction diagnosis. Nothing good comes from post tibial tendon dysfunction, or really anything with the word dysfunction in it’s name. In this case, the foot flattens, the toes turn outward, job growth slows, global warming increases, and a new mosquito-born illness is discovered. I might be exaggerating somewhat but it is serious and the general advice is that, once diagnosed, one should consider alternative activities to running. I certainly have given this a lot of thought and the old college try but the fact of the matter is the alternative activities kinda suck. At a minimum they aren’t as much fun, require too much equipment, or don’t give the flexibility running provides.

After a couple months of backing out of the running world and trying to pretend to be happy riding my bike and swimming more, I began investigating people who still run with post-tibial tendon dysfunction. Immediately results were mixed with the first hits being links to some pretty ugly and painful surgery.

Then I stumbled across “Doc on the Run”. A doctor and Ironman athlete from California who specializes in PTTD. I read his website in detail. This was perfect except he is in California and I am in Pennsylvania. I’ve spent a lot of money on running but making routine flights to and from California for medical advice seemed a little over-the-top even for me. He offers phone consultations but due to the freakin’ awesome US healthcare system I can’t do that in Pennsylvania and still get paid by insurance. Moving on I finally stumbled across Dr. Lee Cohen in Philadelphia! In fact he is the podiatrist of the Philadelphia Eagles and also focuses on PTTD. I called and made an appointment. 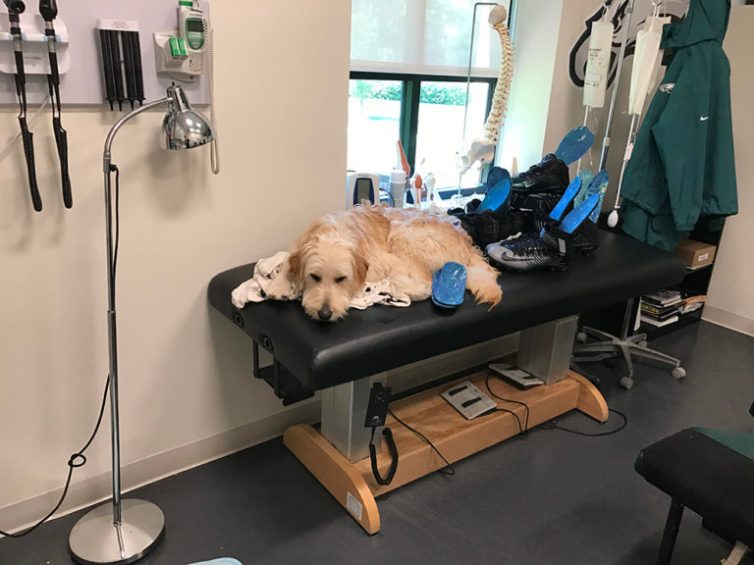 On the day of my appointment I made the drive to Ridley Park, PA checked in with Dr. Cohen’s staff, and was shown to an examination room. There was a dog on the examination table! Dr. Cohen’s Goldendoodle, Hymie, was curled up and sleeping in the middle of the table. My first thought: “This is the best!”. I was told to change into shorts on, leave my socks and shoes off and the doc would be in in a bit. After I changed, Hymie woke up, hopped off the table and came for a visit. We happily bonded until Dr. Cohen came in.

Dr. Cohen apologized for being late. He had just returned from the Eagles training camp. He and a colleague had examined 92 pairs of feet!

That’s a lotta feet. But now he was focused on my feet. And my hips, calves, hamstrings, and body. In addition to a thorough examination of my feet including my previous MRI, and some new X-rays, he performed a lot of flexibility and range of motion tests. Ultimately, he agreed on the PTTD diagnosis but said “no running” might be a bit extreme especially if I really wanted to run. The key would be not only custom orthotics to support the foot but also being very diligent about stretching and loosening up my calves, quads, hamstrings, and hips all of which were tight and inflexible. All these pieces work together and need to function properly. Between discounting the importance of stretching, like most athletes, and sitting at a desk all day, my body was tight.

Dr. Cohen and I discussed custom orthotics including how they are made, how they work, and how much they cost. He said if I were good about stretching and wearing the orthotics I could probably safely do some running. “Let’s do it”!

The orthotic process was interesting. They basically make a plaster wrap mold of your foot as a basis for the orthotic. Dr. Cohen also ordered an X-Ray leg length discrepancy test to determine the exact discrepancy before ordering the orthotics. You can bet I got that done ASAP.

While packing for our annual Labor Day camping trip in Chincoteauge,

I threw in all the necessary stuff for a week camping on the water at the beach: Fishing gear, wine, crabbing supplies, wine, beach umbrella, wine, sunscreen, and, for the first time all summer, my running stuff including my shoes with my brand-spanking new orthotics. Well, not exactly new. My instructions upon pick-up at Dr. Cohen’s office were to wear them ever more increasingly for two weeks and then maybe go for a short run before my followup appointment later in September. They weren’t real specific about what constituted “short” or “before” so the Tuesday after Labor Day I strapped on my new orthotics and ran to downtown Chincoteague and back from the campground. It was four miles of pure bliss! And let’s face it, compared to my old 30-40 mile weeks, 4 miles is pretty short. I repeated this same run one other time, and added in another 4 near the beach on our last morning in town. Note that I did not run ON the beach. For someone with PTTD this, along with any barefoot running, would be a really terrible idea. That didn’t stop me from enjoying a refreshing dunk in the surf post-run though. It would have been hard to do that in cycling kit.

True confessions time: I also tacked on another 11 miles this week with a 5 mile lunch run and a 6 miler with my Wegman’s running crew early on Friday morning. It was an absolute pleasure and highlight to my week to be back out with these guys and gals. I may never toe the line at Boston again or any other marathon for that matter but I’ve learned what matters most isn’t a finisher’s medal at a race but the good friends I’ve made as the pavement passes under foot.

We’ll have to wait and see how my foot holds up to a bit of running. If it seems there is risk or pain, I will back off and not push it. For now I am hopeful there is a flicker of hope in the running flame.