Yesterday was “Quit day”. At almost 2 weeks post-New Year’s Day, quit day is the day most resolutions are dropped like a hot coal. The most common resolutions revolve around health and fitness and usually aren’t “This year I’m going to try to be fatter and have an early heart attack”. Rather they are usually quite the opposite with most people vowing to follow a healthy lifestyle after packing in the merry making for the last month of the year. The result can be seen quickly.

January 2nd new runners appear on the streets wearing the traditional cotton sweats and Reeboks. The gym is full of new folks staring furtively at the machines trying desperately to look like they know how to use them. Unfortunately, these noble efforts last about two weeks. The reasons for quitting are predictable.

Why people quit is unimportant. Typically it is too much too quickly and the expectation that 40 years of sloth and gluttony can be undone by spending a few minutes on the elliptical machine followed by an 800 calorie chocolate peanut butter “recovery shake”. Unfortunately, resolutions are fleeting at best with few people ever seeing the gym again until the following January. 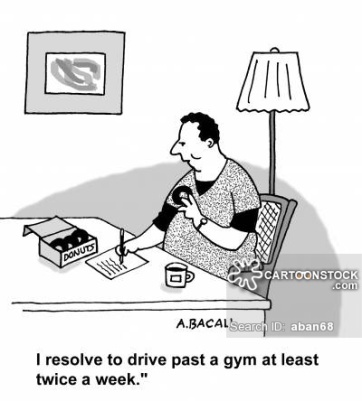 An exercise lifestyle has to be a permanent choice. Diets don’t work nor does jogging around the block 3 times a year. A fit body is created with a proper diet and an ongoing, and varied exercise regimen involving both strength and cardiovascular training. Make these choices and you’ll live a long and healthy life right?

Whoa!!! Hold on just a doggone minute pardner. Ain’t nobody guaranteeing a long  life. Anyone of us could be run down by a texting driver at any moment. It happens with frightening regularity every day. But car crashes or other bizarre accidents aside, the human body is an amazingly complex organism. Along with the complexity of life comes  complexity of death. Cancer, heart disease, stroke, and about a bazillon other diseases both common and exotic can come along and kill any of us out of the blue.

Now certainly living a healthy lifestyle can make a difference in preventing things like heart disease, stroke, and some forms of cancer and also helps in staying away from other diseases of sloth and gluttony like some forms of diabetes. The benefits of exercising vs. not are well documented. But despite doing everything right we are all still susceptible to the fickle finger of Mother Nature.

We have a group of co-workers that often go for a run at lunch. The other day whilst jogging about, the sad story of another co-worker came up. She is a long-time runner, exerciser, and healthy lifestyle person. She is also in the throes of a final battle with breast cancer. The cancer is ultimately going to win. This is a fit person who has done everything right yet she will not get to live as long as other co-workers who do nothing but drink, smoke, and make a career of sitting still.

Perhaps you’ve heard of the Boston Marathon? The little foot race up in the North East? Yes? The race director’s name is Dave Mcillivary.

Dave is not just a race organizer. He is a beast among men when it comes to athletics. When I see the list of his accomplishments, I stop what I’m doing and bow toward Boston. Dave is the very definition of super-fit endurance athlete. But Dave’s latest accomplishment was having triple-bypass surgery in December of 2018. You see, Dave and many other’s like him lived under the notion that plenty of exercise is a free pass to eat what ever he wanted. How many times do we hear runners say “I run so I can eat all the food”. If this is you, Dave and I hate to burst your bubble but . . . . no. You can’t necessarily eat all the food because you run.

So why run? Why ride? Why swim? Why exercise at all if it doesn’t do any good!? Hey now. Nobody ever said that either.

I’ve probably related this story before but once upon a time only a few years ago I was one of those that said “I don’t run unless something is chasing me”.

One day I realized if in fact, something (or someone) were chasing me, I was going to get caught pretty easily. I was a fat, amorphous blob with high blood pressure. I was a stroke waiting for a place to happen. I love the outdoors. I like fishing. I like hunting. I like being out in the woods and seeing what’s over the next hill. Before I started running, I could only do that if the next hill was 50 yards or less away and not terribly steep. Even then I’d be huffing, puffing and sweating. I can remember more than once bagging a deer and having to drag it out and wondering if I was truly going to make it back to the vehicle. A day of hunting the mountains left me sore, tired, and incapable of further efforts for days. This was no way to live. I loved being out there too much so I started running, and eating better.

I’m not going to bore you with the journey to better fitness or my success stories especially since they aren’t always successful. I fight sugar cravings and have weeks to months of bad decisions. Living a healthy lifestyle is a constant struggle and takes vigilance. The temptations are endless and the inevitable injuries that come from a routine of vigorous exercise make things difficult as well.

We are at the tail end of hunting season here in Pennsylvania. I’ve had an awesome time this fall spending many hours in the woods among nature and friends. While it hasn’t been the most successful season we’ve seen, it was successful enough and just seeing old friends again is success in itself. For the rifle buck season we spend about a week in the Pennsylvania mountains. Our hunting spot involves a one to two mile hike one way depending on where we are hunting. This is done with heavy clothing, day pack, and rifle. If the hunt is successful it means hauling out a sizeable animal that same distance. Each day this year involved a long hike or similar amounts of walking, carrying, and hauling. While years ago this would have rendered me pretty useless by week’s end, these days there are no limitations from my body. I was as ready to go the last day as the first. This is why I run, ride, swim, lift and focus on the vegetables instead of the cookies. This is why I arise each morning well before the chickens and the sun to get a workout in.

The phrase quality of life may be overused but is of vital importance. It is great to live to a ripe old age if one is lucky enough, but age comes with a cost as the body naturally declines.  It is better not to be additionally limited by self-induced physical impairments as well. By way of example I give you the case of Ed Whitlock.

The runners among  you know who Ed was. For those who aren’t, Ed was an English born distance runner who set and held many records as he ran into his 80s. Ed ran his last marathon in March of 2016 in the time of 3:56:38. A sub four hour marathon! This is a stout achievement by any measure or age. He also held the 81-85 age group record in the 10K at 51 minutes and change. No doubt Ed could do whatever he wanted at age 85 without limitations from his body. That did not stop him from dying of prostate cancer in 2017 just after his 86 birthday. But think that through for a minute. Instead of being cooped up at home talking about his youth at age 85 Ed was out running a strong marathon and probably doing whatever else he wanted. That’s quality of life!

The journey to fitness has its own rewards. It is not a solo journey and there are thousands of other people out there with similar attitudes. Some of these folks have become some of my best friends.

Each Friday I leave home at 4:00a.m. to meet some of these friends for a Friday morning run. We typically meet regardless of weather. Mileage and pace varies but is always capped off with coffee and great conversation. It is truly my most treasured time of the week the year round. Running together is as much a part of this social scene as is the coffee and conversation. We come from diverse backgrounds with a wide range of political and life views. Without the running we would be strangers awkwardly sitting together discussing how cold it was outside. With running we are a close-knit community of good friends.

This is why I run. This is why I like to keep the hard-earned fitness I’ve achieved. It’s a big world out there full of waiting adventures and new friends I haven’t met yet. It’s easier to go out and find them all with a body that doesn’t hold me back.